Recently I have used storyboards to build an App.net client. After many hours with it I have to say, I won’t use storyboard in future project unless Apple improves it tremendously.

One of the main problems I have with the storyboard of this rather simple app can be summarized in one picture. 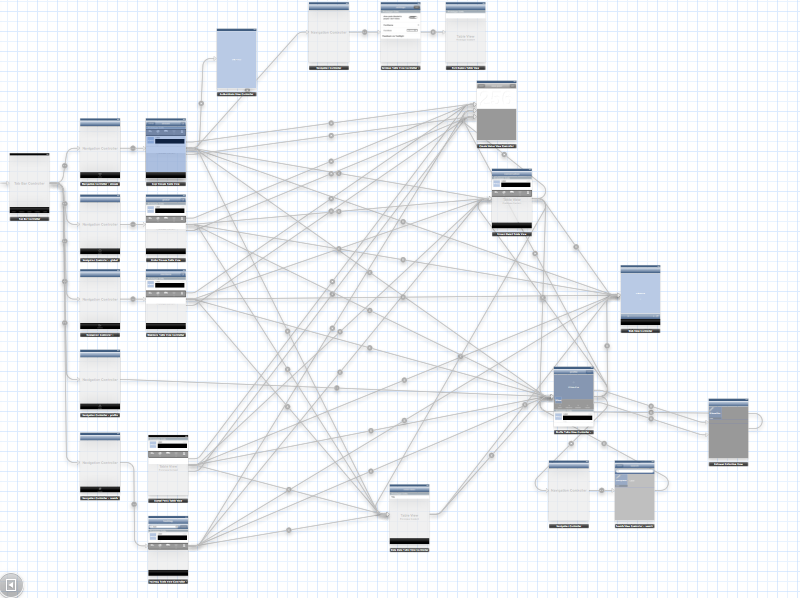 The storyboard of hAppy, my App.net client.

I am not saying it is not possible to reuse one view, but all my attempts did not solve the problem. So if it is possible it is to complicated for me.

Repeated information in software development is a problem. During the development of hAppy I had to change the views a lot and this led to changing the same part of the user interface in different parts of the storyboard. Without the use of storyboards I just would have changed a few lines of code for all views at once.

A lot of the segues I use in hAppy push another view onto the navigation stack when the user touches an action button beneath a post cell. Let’s say the user touches the profile button to show the profile of the user who posted the status. The first thing is to find the indexPath of the cell which contains the post.

Then I call a method to get the dictionary for the post and extract the user from this dictionary.

Doing so I can use one segue for one transition between the post view and the profile view.

Yes, I know what you think. This is awful and inconsistent. But the other possibilities I can think of are worse. I my opinion Apple could fix this with a method like performSegueWithIdentifier:sender:userInfo: with userInfo being of type NSDictionary. Then one could give the actual segue preparation additional information for the view to be shown.

This entry was posted in Development and tagged Xcode. Bookmark the permalink.